To the “New AA” — please stop misrepresenting yourself as a single airline with US Airlines. 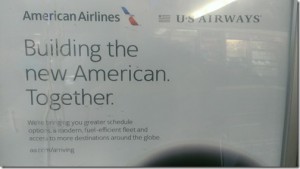 You are not conducting yourself as a single airline, and the result is that I won’t see my kids this evening.

I booked an AA round-trip from Dallas to Phoenix (with AA flight numbers) because I am a faithful AA flyer. My outbound flight was on AA, but I was surprised to find that my return flight was “operated by US Airlines“. I didn’t want USAir, even though I saw those options when I booked my flight, so I booked AA … and got USAir anyway.

Because my AA flight number was actually a US Airlines plane, I couldn’t get preferred seating and couldn’t request an upgrade. How is that “one airline”?

I arrived four hours early to the airport and went to the AA counter, whose very friendly, professional and empathetic staff explained that I was booked on USAir, so AA couldn’t help me — even though I booked an AA flight number. The AA staff courtesy was a stark contrast to the brisk, almost rude, US Airlines staff who printed my boarding pass when I requested to standby for the earlier flight.

I went to the US Air gate for the earlier flight (3:30p) and stood at the counter while the gate agent handed out other standby boarding passes, including to non-rev’s … and then said that I wasn’t on her list and it was now less than 10 minutes before departure.

An earlier US Air flight at 3:30 had available seats, but I couldn’t have one — because the front agent hadn’t put me on the list (even though we talked about it, including the likelihood of availability) … even non-rev’s got on, but not me.

An earlier AA flight at 4:00 also had available seats, but I couldn’t have one. I walked to a different terminal but the AA agent, though harried was still more professional than US Air’s staff — and she explained that even though I had an AA flight number, she couldn’t help me either.

While I was surprised by the US codeshare, I expected the same respect and helpful service that I might get when flying on American Eagle. If I had booked an AA codeshare that was “operated by British Air” or another OneWorld partner, then I would presume this disconnectedness — though I have had much better codeshare experiences with AA flights operated by both BA and Qantas than what I’ve seen with US Air. But you are one airline, right?

If your answer is “that sharing is coming” — then TAKE DOWN YOUR SIGNS, because your marketing department is making promises that the rest of your airlines (plural) are unable to satisfy.