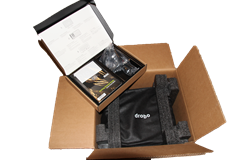 I am a Backup Guy, which by definition means that I somewhat pretend to be a Storage guy, too (cuz where else are you going to store back up stuff?).

Well, a few weeks ago, I decided to augment my home lab with some additional storage and had been really intrigued by the iSCSI offerings from Drobo.  ESG did a full lab validation on the Drobo B1200i (12 drives), but I opted for the slightly more modest (8-drive) B800i – and wow !!

The first thing that I noticed was that even though one might consider it a small office solution, did not mean that it was generic or underwhelming.  Instead, I found it well packaged, self explanatory for setup and built in a way that just seemed to exude solid engineering.  There is something about the implied quality and pride in the packaging that just seemed to say “this is going to be good”.

It took me less than 10 minutes to to unbox it, plug in its power and iSCSI Ethernet cables and connect to it via the management UI (cd) via USB cable.  The 8 drive bays can each take a generic SATA commercial drive; with the drive bay clasps offering color-coded status indicators, such as:

There are more status conditions, but you get the idea.  One by one, I inserted drives into the left-most bays and watched red turn to yellow, turn to green (left screen).  Before long my four 2TB drives were one big 5.4 TB pool of capacity, due to built-in rebalancing and fault tolerance (middle screen).  From there, I created a 16TB drive LUN (right screen) that would be offered via iSCSI and I was ready for business. 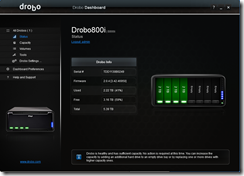 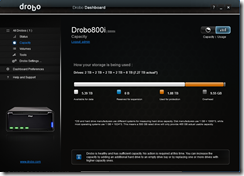 16TB LUN out of 5.4 TB of capacity?  Yes, it provides thin provisioning, too (read the ESG Lab Validation).  I later created a second 16TB LUN for use by a different machine, and now I had 32TB of storage offered out of 5TB of live data.  Of course, I wont be able to store all 32TB in my 5TB of space, but it sure did make provisioning easy, so that I can add actual capacity as my consumption demands it.  Capacity which (by the way) is not only displayed in the UI, but in a fill meter of blue lights on the front panel of the unit (left screen) – so its easy to see how much of the physical capacity is in use. In fact, my only gotcha in the entire experience was that I didn’t see the note about unplugging the USB configuration cable before the iSCSI service would work.  But thanks to the friendly Drobo tech support dude (Brad) who didn’t make me feel stupid when I missed it in the getting started guide, I was up and running.

Beyond the Drobo itself, I am also a big fan of iSCSI.  My virtualization hosts each have at least two NICs, so that I can isolate my iSCSI storage traffic from my networking traffic – and I was able to easily add a second virtual NIC to a few VM’s, as well as two physical hosts, and all of them happily connected to the iSCSI storage pool in my Drobo.  The problem with being so easy to add storage and configure for use within my environment creates my only challenge with the Drobo – I am going to need more disks or (since it was just a few weeks since I ordered my 800i) perhaps a 1200i instead.  It really is just too easy – so I’ll be using mine a lot.

Update: December 2012. The easyness continues. After having filled up my initial storage pool, it was time to expand. To do so, I inserted two 3TB drives into the slots next to my existing four 2TB drives. Each one took under a minute to go from orange-blinking (currently active/do-not-remove) to green (in-use), while I watched my appliance’s blue %-capacity-in-use lights drop down. That was it, now back to work. I am saving my last two drive slots to see if I can use SSD in it, and will update this post again if I do.

As always, thanks for reading.

6 thoughts on “Why can’t everything be as easy as a Drobo?”