It’s been a few years since I came to SNW – and while, the number of end-users appears to be dropping (my perception vs. recollection), the types of end-users appear to be exactly the right kind of audience that SNW was built for: storage savvy IT stakeholders looking for education on technology evolutions. I do wish that SNW would lessen its restrictions or allow a defined percentage of its sessions to actually mention products, as I heard some veiled sales pitches where the ‘evolution trends’ discussed by the ‘experts’ were coincidentally only manifested by that particular expert’s product-line. Enabling some sessions to be product-informational might breathe some new life into that program.

That being said, this was also my first SNW as an industry analyst and I had the opportunity to visit with companies of all sizes. Here are a few memorable things that I looked at:

Symform – The coolest idea that I saw this week

Symform offers a peer-to-peer cloud-storage model, where you gain access to cloud-storage based on how much capacity you offer (contribute 1TB to the collective and you’ll get 1TB of usable storage). For your data, every block is first encrypted (AES256) and then sliced into 64 fragments. Then, 32 parity fragments are added – so one might think about it as RAID-96.  Those 96 fragments are then randomly scattered to 96 anonymous other Symform contributors. The goal is to enable a data protection tier that is secure by its encryption and its disbursement.

It’s a cool idea because it forces you to rethink where in “the cloud” your data is. Does it have to be in one other data center that is simply outsourced – or could it really be scattered across the very Internet itself? Am going to sign up and try it myself and likely blog it later.

I am definitely not a “Tape is Dead” guy, but I was admittedly biased to relegate tape as a long-term retention medium only. LTFS, as a feature of LTO-5 tapes which provides two data tracks on the tapes themselves – one for the data stream and a second with the metadata that is effectively a file system directory. The resulting capability is a software-independent, standardized way to mount an LTO-5 tape like a USB Flash drive. You get what tape has always offered (long-term shelf-life) but also to a certain degree, a multi-access storage medium that is usable even without backup software. Think about this:

My only disappointment was seeing how the three vendor representatives (all wearing the same LTO Ultrium consortium shirt) finished each other sentences cohesively – but when I said “I’d like to try one to talk about,” each pointed to one another and they became separate vendors again. I don’t really blame them, as a standalone LTO-5 drive costs over $2,000 (still well within SMB budgets). Hence, don’t look for my personal observations on LTO-5 and LTFS in the near future. Still, LTFS forced me to admit that my assumption that “all that could be innovated in tape already has” was incorrect. 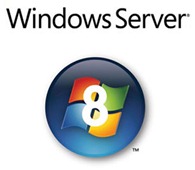 Many years ago, Microsoft’s storage teams were as common at SNW as any storage/server vendor that was a platinum sponsor this year. As SNW evolved and Microsoft’s storage solutions matured and converged within the Windows OS itself, Microsoft hasn’t been as visible at SNW – but here they were, talking about some of the storage solutions that Windows will soon be supporting, which either enabled or leveraged almost every other SNW demonstrating storage vendor. From my past lives, I know that many of the storage-specific features that used to only be in their OEM’d Windows Storage Server offerings are now often found in the mainstream Windows server.

Between the changes in SMB (Microsoft’s implementation of CIFS) and its approach to file systems and what appears to offer scale-out and scale-up storage through a clustering of Windows Server 8 that doesn’t look much different than the adding of storage controllers and capacity shelves in any other top tier storage solution, including features such as deduplication (for example). In regard to its upcoming built-in deduplication feature, which arguably might be better referred to as per-volume single-instancing, it was cool to hear that in Microsoft’s own test labs, they saw an 87% reduction in VHD storage. There is more information coming on WS8, but I was happy to see Windows storage topics back at SNW in a way that all of the Windows-owning SNW attendees and Microsoft partners that deliver storage solutions can learn and prepare their Windows environments for evolutionary storage innovations.

There were several other interesting topics at SNW, some of which you’ll be hearing about over the next several weeks as they are publicly announced and/or in future blog posts from me. But in the meantime, feel free to check out Symform, LTO Ultrium and Windows Server 8.