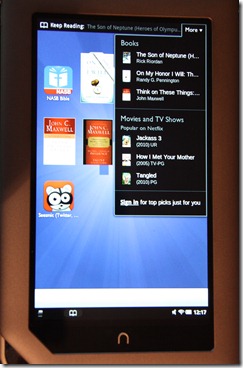 First, let me say that I have been a fan of the Nook since it came out.  I owned an original, have two Nook Colors, and bought a Nook Tablet on its first week.  In total, my family has 5 devices, along with umpteen book and apps.

But all of that fidelity waned today – because of Netflix.

When my kids, my in-laws or I use the home screen of my Nook Tablet … we now see “Jackass” recommendations from Netflix.  (literally)

To be clear, I don’t use Netflix and don’t want to.  It turns out that you cannot uninstall the Netflix application, nor can you hide its recommendations to you.

My Nook Color with the latest update does not show Netflix recommendations, even though it can now use Netflix too … but my Nook Tablet does.

Since Nook Color doesn’t show Netflix recommendations but Nook Tablet does … it must be a switch in the software, right?

B&N’s “ProfessionalSupport@Book.com” folks told me how to install the NetFlix app.  (I hate canned responses that don’t read the question – Maik)

So, I emailed again, asking them to actually read my question – explaining I did not want to install, I wanted to stop seeing vulgarity.

And B&N’s Kent told me how to install the Netflix application.  (Double Fail)

The first person told me to go to BN.com to delete the app – but you can’t delete Netflix, because it is pre-loaded.

Then, she told me to delete or archive it from the Tablet’s screen – but you can’t delete Netflix, because it is pre-loaded.

So, I tweeted @nookBN about my poor tech support

^AJ suggested that I use Live Chat instead … but at 1PM on a Friday, Live Chat is closed.

According to escalated B&N tech support: if I start a monthly subscription to Netflix, it may show recommendations that are more appropriate.

Notably, Jorge was the only person who actually seemed to understand my question – and said that he would send the request up for a future release.  In fact, he later exceeded my expectations by actually following up in email to let me know that he confirmed NetFlix was not hide-able from the Nook Tablet’s menu and that the suggestion was sent to the developers.  It still seems weird that my Nook Color 1.4.1 doesn’t show it, but my Nook Tablet (also 1.4.0) does.   But I appreciated Jorge trying – and following up.

Embedding Netflix so tightly (and visibly) into the Nook might be reasonable if B&N owned Netflix and were therefore trying to drive awareness of their sister products – but they aren’t.  Interestingly, Hulu is also part of my Nook Tablet, but they didn’t get the advertising…

While I wanted the longer battery life, I was already disappointed to learn that of the 2X memory between my old Nook Color and the new Nook Tablet, less of it (1MB) is available to me.  The rest of the Nook Tablet’s memory is only usable by B&N purchased content.   Of course, I can add a microSD memory card … but I could have done that on my Nook Color, especially now that it has the same 1.4 software features.

I may try taking back my Nook Tablet to the local B&N store … but if the other avenues of ‘Customer Service’ are any indication, I expect that it is non-returnable at this point.

Dear B&N – please let me know when we can actually use the 16GB that you are selling … and when you are not so tightly coupled to a dissatisfactory third-party app and service.

Dear Netflix – if I could watch movies offline, since a good part of my Nook usage is in airplanes, then I might actually get a subscription.  Until then, please leave my eReader alone.